Here are the textbooks you should use to prepare for your police promotion in a police or sheriff's department. Exams with up to 500+ questions, from over 100 great textbooks, are now available.

PLUS many more exams are in the works!

Here is our current list of all 120+ police promotion exams

What is the best textbook to study for your intelligence-led policing exam?

Intelligence-led policing - also called ILP - is such a new topic, there are very few police promotion textbooks dedicated solely to its study. ILP does appear as a chapter or a treatment in many other promotion textbooks that cover criminal investigation and supervision and management topics.

There is one textbook, now on its second edition as of 2016, that does stand out, and that one is described in detail below, Intelligence-led Policing by Jerry Ratcliffe.

My BEST piece of advice on this page? If you believe you are heading to sergeant or lieutenant, or to a detective division for assignment at any time in the future, especially if the assignment involves a promotional exam, you need to own and constantly read the material in the below textbook. ILP is a complicated topic, and it will benefit your career in the long run to keep refreshing your understanding of the professional knowledge.

Intelligence-led Policing by Jerry H. Ratcliffe - I really like this book. I also really like the author's background. He is a Professor with the Department of Criminal Justice and Director of the Center for Security and Crime Science at Temple University, Philadelphia. He is a former police officer with London’s Metropolitan Police (UK) where he served for several years on patrol duties, in an intelligence and information unit, and as a member of the Diplomatic Protection Group. The intelligence-led policing exam from this textbook is usually paired with a criminal investigation textbook exam for police sergeant and lieutenant tests.

Ratcliffe's second edition includes new case studies and viewpoints, a revised crime funnel based on new data, and a new chapter examining the expanding role of technology and big data in intelligence-led policing. Ratcliffe builds upon an updated definition of intelligence-led policing as it has evolved into a framework capable of encompassing more operational police activity. Visit us for the Intelligence-led Policing exam, test questions, study guide and flashcards. 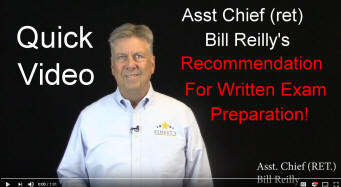 Try a few short, sample exams and online flashcards - at no cost. You'll receive an email with your login in the next few minutes. Then learn more about our exams and study system - and Enroll Today.

Some of the most important concepts you need to know about Intelligence-led Policing:

Having an in-depth knowledge of all these topics is crucial for promotion to Sgt. Lt. Captain or above, or for a career in criminal investigation. Also, each of these topics will branch off into very similar and related topics. Follow those branches!

Respond to this police detective, corporal, sergeant or lieutenant oral board question:

How would YOU describe your knowledge and experience in Intelligence-led policing?"

"I've read everything about the topic, especially the FBI's treatment on ILP in fusion centers and its application to terrorist investigations.

I pushed myself to learn all about this new method of crime prevention and investigation.

Most important, if ever time permitted, I always followed up and took an investigation as far as I could, a great many times making an arrest on a case that normally would have been turned over to a detective.

There is nothing I aspire to more than putting all these talents to work in our agency's detective division."

Sign up for our police promotion newsletters. You will be able to take free promotion exams online to try out our system, including questions from Criminal Investigation textbooks, and also receive information on police oral boards and assessment centers.

Send me Exam and Assessment questions you have faced - one of the column features is that I will research and comment on written exam or assessment center questions you have heard, answered or encountered and that you are unsure or curious about. We will be glad to give you our expert opinion on questions you have seen asked on exams and exercises. Send your questions to me directly - Paul@PoliceCareer.com.

Intelligence-led policing flashcards - Question 3:
While conceptualizing intelligence is a challenge for policing, the one thread
running through most definitions is that intelligence is
A data on crime and criminals
B predictive of future criminal behavior
C more than mere information

Intelligence-led policing flashcards - Question 4:
The most widely employed application of analysis to crime control is known as
A crime analysis
B spatial analysis
C tactical analysis
D none of the above

Intelligence-led policing flashcards - Question 5:
What type of crime prevention deals with the actual offenders, and involves intervening in their lives in a way that prevents them from committing further crimes?
A primary
B secondary
C tertiary
D none of the above

Intelligence-led policing flashcards - Question 6:
Don Weatherburn in 2004 identified five features of a rational approach to crime control. All five are listed below, not in order. Which one is essential as a first stage in determining whether policies are successful in combating crime?
A commitment to rigorous evaluation
B reliance on evidence in the development of policy
C a flexible and eclectic approach to control
D open access to crime and justice information
E adequate investment in measuring and monitoring

Who am I and why am I writing this?

I am Lt. Paul Patti (ret). I was in law enforcement for 27 years, retiring as third-in-command of a 145-person law enforcement agency. Since 1985 I have been owner and Director of Police Career and Promotion Services, LLC. Read more.

Intelligence-Led Policing As a Framework for Responding to Terrorism

Intelligence-led Policing -Oral Board Question 1 - You need to STAND OUT- so Get Creative!

A very special and loud "Thank You!" goes to our affiliate, Assistant Chief Bill Reilly (ret) of Finests.com for producing and allowing the use of these exceptional police promotion oral board instruction videos.