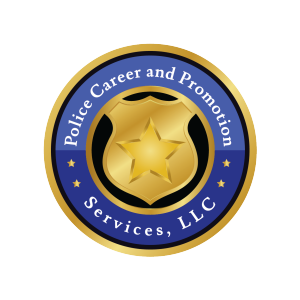 Long before you get out of the police academy and start questioning suspects ... there are a few hundred stressful interview questions YOU will need to answer.

Police officer interview questions will have YOU feeling like the suspect. That's the idea.

Sort of like the police academy insisting that a trainee should experience the shock from an ECD - electronic control device - or a strong and pungent spray in the face with OC pepper spray before graduation. YOU are about to go under intense interrogation as a law enforcement candidate. Expect to answer hundreds of the toughest questions you have ever had put to you. 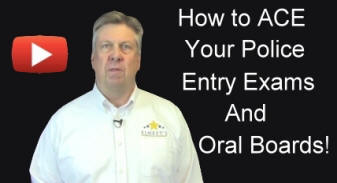 I performed OVER 500 police officer interviews.
The experience is detailed in my best-selling book, Confessions of a Hardass - with instructions on how to pass YOUR police oral board interview.
Many other bonus items are included in the 29.95 Police Entry Level SUPER Course - including special details on POLICE OFFICER INTERVIEW QUESTIONS! Sign up TODAY - GET HIRED in law enforcement!

If you are interested in a law enforcement career, this is the most important place to start - learning all about the police officer interview questions you will be facing. While police entrance exams are important (and are a specialty of mine, I have written quite a few), the police agencies where you apply will be much more interested in how you handle yourself under pressure, and how well you communicate under stress. Those two things sum up the most difficult parts of the police officer work day. So that is what the agency will focus in on;  can you handle difficult people under stressful circumstances, without losing your cool?

Just like "good cop - bad cop," a police officer oral interview will be conducted by at least one or two "good interviewers" and one or two "bad interviewers." Bad, in the sense that they are going to ask you difficult questions, then disagree with and challenge your answers, then add more and more disagreement and stress. They will try to see if they can get you to slip and lose your temper or no longer be able to communicate because of the pressure.

Lucky for you, for 19 years in total I was a "hardass." I was one of those purposely difficult people putting police entry applicants through some of the most hellish police officer interview questions they ever imagined.

I am often asked if I enjoyed being the 'hardass" on the interview panel. The answer of course is ... yes I did. Very much. I thoroughly enjoyed knowing that I had a hand in finding and hiring only the best police officer candidates to work alongside myself and my fellow officers.

I performed over 500 police officer interviews. The experience is detailed in my best-selling book, Confessions of a Hardass - an insider's advice on passing your law enforcement pre-employment interview.

Dozens more questions, along with all the responses, a workbook with even more questions, plus score sheets and many other bonus items are included in the 29.95 Police Entry Level Super Course. 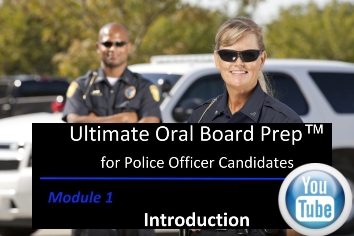 Here are some police officer interview questions from my book;

"Over a year ago you overheard a brief conversation between another officer and a sergeant.

The officer reported to the sergeant that he lost his police shield (badge) at home and can't find it. Time goes by and you basically forget the conversation, until a party at that officer's house over a year later. There, you overhear another conversation between that officer's wife and other people. She shows them a wallet with a police badge in it, and says that it was a great idea for her husband to give her this "present" in order to avoid traffic citations.

You remember the conversation about the lost badge. What would you do?"

"You are working an overtime detail at a local high school basketball game on a busy Friday night. You know another officer is scheduled to work overtime with you, but she does not appear and you do not see her at any time during the entire three hours that you are at the game.

You don't mention this to anyone and forget about it, but a week later, the next pay day, you happen to see the officer's paycheck and the overtime money from the basketball game is added into the check.

How do you handle this situation?"

During a background question, you answer a minor point by saying that you didn't enter military service so that you could finish college. One interviewer, a patrol captain, appears greatly agitated, and when it is her turn, she tells you while sounding quite agitated how she sacrificed college and instead she developed life and leadership skills in the U.S. Navy. How do you respond?

"You are a newly promoted sergeant. One day, just before the end of your shift and the roll-call for the new shift you meet one of your close friends and former partners coming to work. During some joking, he confides in you that he hates his new sergeant because the sergeant's a drunk and a liar. When you become concerned and ask for details, your old partner says to "forget it" and rushes off, obviously annoyed with himself for saying anything to you. Do you mention this to this other sergeant? To the lieutenant? Do you keep it to yourself? How would you handle this?"

"You are a new officer, and you stop a car for speeding. In the
car is a woman who is screaming hysterically about having to
leave quickly because her ex-husband just "stole her baby." She won't calm down and she won't shut off the car and get out like you ask. She wants to leave, and you are trying to think about what to do or say to calm her down and have her act rationally. She rolls the window back up before you can react and begins to drive away. What do you do?"

"Are you opposed to persons with sex-change operations becoming a police officer? If a police officer looked like a male but had the mannerisms and voice of a female, why might they not be able to gain the public's respect?"

"The Chief of Police arrives at a crime scene involving the shooting death of a drug suspect by a police officer. You are guarding the scene and have been told by the Lieutenant Watch Commander that NO ONE, with NO EXCEPTIONS is to enter the crime scene. You tell the Chief this but he tells you to ignore the lieutenant's order and then orders you to step aside and let him pass. Take a few moments to collect your thoughts. (The board waits about one minute before continuing), Okay, now tell us specifically, in 50 words or less, EXACTLY the words you will use in your police report to describe what happened when the Chief of Police arrived on the crime scene."

Sign up to receive the FREE POAJS self-assessment exam along with our newsletter. Your email address and all your information will always stay private and confidential. Here is our Privacy Policy. You can unsubscribe at any time.

Dozens more questions, along with all the responses, a workbook with even more questions, plus score sheets and many other bonus items are included in the 29.95 Police Entry Level Super Course.

Who am I and why am I writing this?

I am Lt. Paul Patti (ret). I was in law enforcement for 27 years, retiring as third-in-command of a 145-person law enforcement agency. Since 1985 I have been owner and Director of Police Career and Promotion Services, LLC. Read more.

You will never need to worry about links, downloads and privacy on this site or any of our other sites. We always use a secure and encrypted "https://" link (check the address bar) and have earned the McAfee SECURE certification. Here is our Privacy and Security Policy.

"Your sergeant, who is also a close friend, nominates you for officer of the month for an excellent arrest that you made that solved dozens of burglaries in your zone. Trouble is, the sergeant gave you the critical information needed to solve the crime to begin with, so she deserves most if not all of the credit for the subsequent arrests. The sergeant gives you a direct order NOT to reveal her involvement and to accept the praise and award and enjoy the glory. What do you do?"

"You have been ordered to stand by and watch an armored car delivery of cash to a local bank. There has been information about possible robberies of these armored cars occurring in your city. While the delivery of cash is being made to the bank, an officer calls for assistance just a few blocks from where you are sitting in your car. The truck looks like it is almost finished with the delivery. What should you do?"

"Are you opposed to persons with sex-change operations becoming a police officer? If a police officer looked like a male but had the mannerisms and voice of a female, why might they not be able to gain the public's respect?"